Professor Pavlos Lagoudakis, University of Southampton, to speak at ECE-NTUA on October 26, 2021, at 11:00

Professor Pavlos Lagoudakis from the University of Southampton will visit the School of Electrical and Computer Engineering of the NTUA, as a guest of Photonics Communications Research Laboratory, and will give a speech on “Liquid Light Computing: from logic to analogue simulation“, on Tuesday 26 October, at 11:00, in the room 1.1.31 of the old ECE building.

Abstract: Modern digital computers have changed our lives in a variety of ways, but the technology on which they are built is rapidly reaching a hard limit due to inherent quantum effects. Two of the main pillars of our modern digital computers are the electronic transistor and the von-Neumann computer architecture. While the von-Neumann architecture established the physical separation of computing tasks like storage and processing, transistors are the fundamental building blocks in digital computers. The drive for faster and more powerful computers can be realised by increasing the number of transistors in a processor and the clock frequency. However, Moore’s law will soon come to an end, whilst the breakdown of Dennard’s scaling law means that clock frequencies have remained unchanged since 2006. This leads to the pressing quest to develop new kinds of transistors and alternative computing architectures that could one day lead to more efficient computers.

Prof. Lagoudakis and his team combine state-of-the-art photonic structures and light emitting semiconductor materials in which light and matter fuse to form new types of particles called polaritons. In a sense, polaritons bridge the fields of electronics and photonics by controlling the amount of light vs matter in these hybrid particles. At high densities, polaritons undergo ‘condensation’ forming micron scale droplets of liquid-light, with all particles within the droplet being coherent and indistinguishable from one another. In this seminar, I will describe the fundamental properties of such liquid-light droplets, aka polariton condensates, and their applications both in analogue (simulators) [1,2] and digital computing (logic) [3,4].

Short bio: Prof. Pavlos Lagoudakis, graduate of the University of Athens, Greece, is the Head of Hybrid Photonics, a joint international laboratory at Skoltech, RF and the University of Southampton, UK. His research spans the fields of photonics, strong light-matter coupling, semiconductor and condensed matter physics. 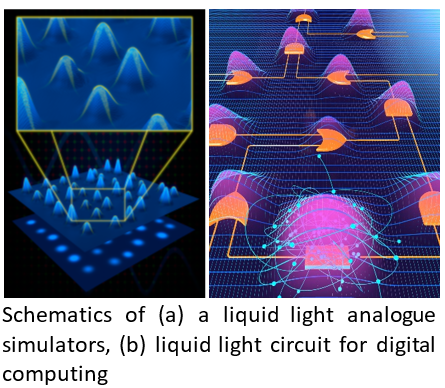