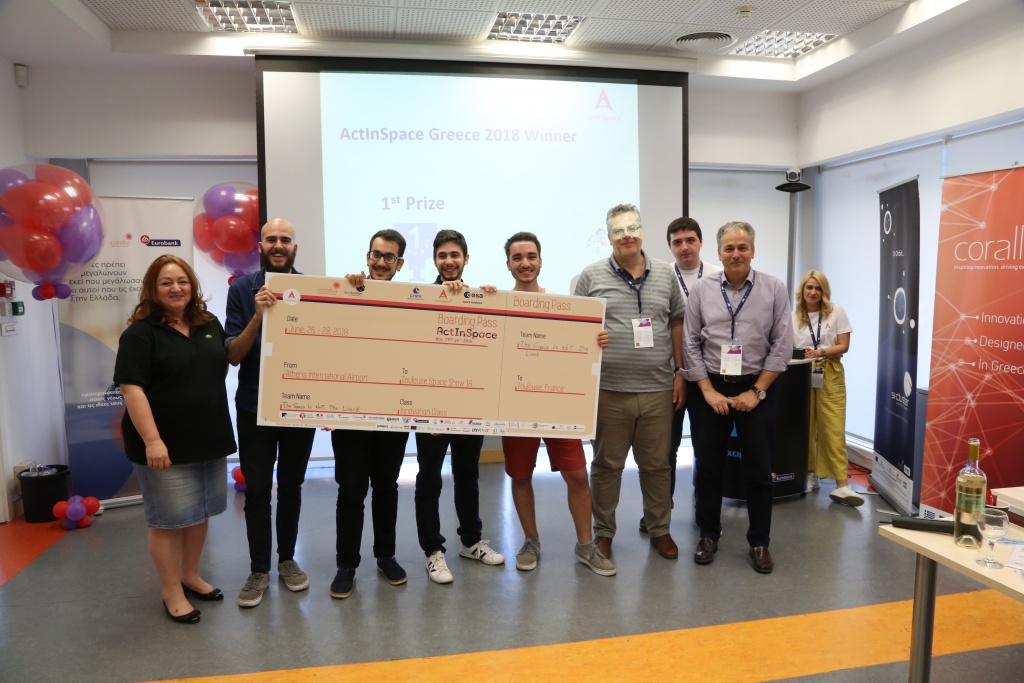 The international contest “ActInSpace 2018” took place in March 2018 and attracted more than 2.200 participants from 35 countries.

The ActInSpace 2018 in Greece was organized by Corallia and the si-Cluster with the support of the School of Electrical and Computer Engineering of the NTUA and a number of sponsors.

The competition started on Friday May 25, 2018 by Prof. Vassilios Makios, director of Corallia, and Dr. Jorge Sanchez, president of si-Cluster. Throughout the competition, participants were supported by distinguished mentors, both from academia and business, and created their own innovative products and business plans which were presented at a special ceremony to the members of the jury, Zoi Ekaterinidi, CEO of Software Competitiveness International, UOA Prof. Constantinos Cartalis, ECE NTUA Ass. Prof. Dimitrios Soudris, and Doctoral Candidate at the NTUA and winner of ActInSpace Greece 2016, Giorgos Profitiliotis.

The teams who won the first three places are:

The former (The Space is not the Limit) is the Greek team who received the ticket to Toulouse, and will represent our country in the international finals. The product they developed is a toolkit, with the help of a drone, which helps visually impaired people move freely in urban environments.

Other products and solutions developed during the Greek ActInSpace by participating teams Asteres, Ecentric Minds, Juggernauts, Mapdefenders, SkyLine, Space Dock, VoidPlus, are an algorithmic method for automatic detection and sorting of ships from satellite data, a microgreens hydroponic plant in microgravity conditions, a mechanism for the direct detection and extinguishing of fires in forests, an outdoors hologram projection device using drones and a floating balloon, a verification method for the origin of consumer's goods, software for automatic comparison of existing map data with current field state using satellite images, an application for measuring crowdedness of entertainment venues, and a space policy proposal for the colonization of space.

The team “Space is not the Limit” will compete in the International Finals of ActInSpace, with the chance to win the final prize - a flight on Airbus Zero-g aircraft - to experience zero gravity conditions. In addition, the final offers a Voucher of 100,000 € for satellite data from Airbus Defense and Space, as well as mentoring for the further development of the idea and creation of a start-up. The winner of the FabSpace challenges will win a trip to the Toulouse Space Show, support from the local FabSpace, as well as a meeting with Airbus representatives.

"After 24 hours of exhausting work, we managed to combine our knowledge and ideas and create a feasible - yet ambitious project that won us the ticket to the international finals in Toulouse. The contest provided us not only with knowledge and skills, but also the opportunity to participate in a multidisciplinary team in order to design an innovative project for society. It was not just the valuable experience of directly applying knowledge you gain that mattered, during a hackathon or a start-up, but the fact that we became a team in just one night. We would like to thank the organizing team of ActInSpace Greece, the volunteers and mentors, Corallia and the si-Cluster, and the sponsors for the continuous support they offered during the competition. The main goals of our team are to present our idea in the international finals and, ultimately, to improve the lives of millions of visually impaired people around the world."

The sponsors of the ActInSpace in Greece are: the Greek FabSpace, EFA Ventures, specialized in the provision of specialized services for the aerospace market, for security and new technologies, Terra Spatium, that offers integrated and exclusive geospatial solutions for advanced markets and applications in the fields of Geoinformatics, Planetek Hellas, Software Competitiveness International, Eurobank, Coca-Cola Hellenic, Nestle, the French Embassy in Athens. The event was supported by AFI, the French Institute of Greece, Mazinnov, Hellenic Association of Space Industry, the Greek networks Copernicus Academy and Relay. Contributed in the competition: egg-entergrowgo, ACEin, Euroavia Athens, SPIN, Unique Minds, EMEA and Pestaola.gr.