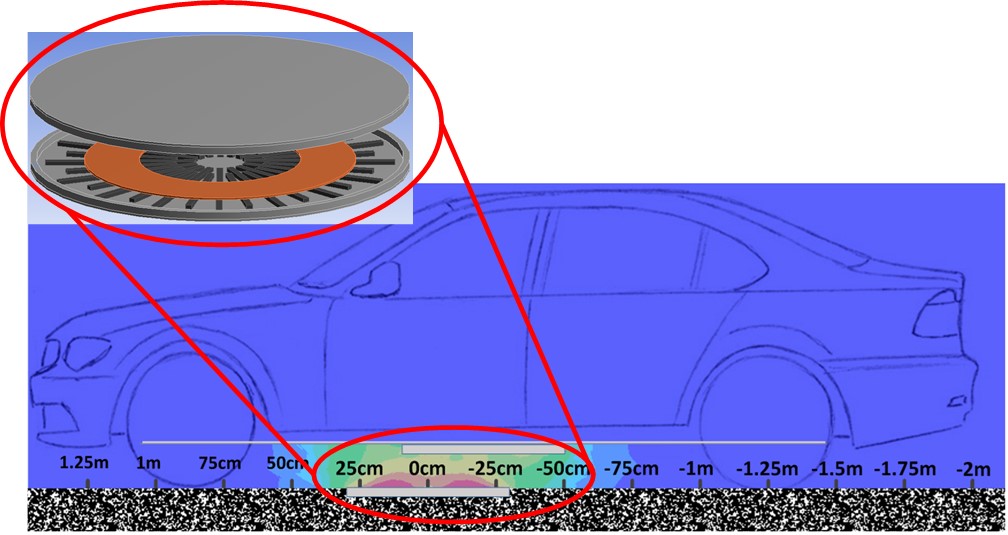 The examination is open to anyone who wishes to attend (Multimedia amphitheater, Central Library of NTUA).

Abstract: Inductive charging, which allows the wireless transfer of energy between the Electric Vehicle (EV) and the charging station, appears to be a very promising charging solution. Apart from the ability to transfer energy in a contactless way while the EV is parked over the station (i.e. static inductive charging), energy can also be wirelessly transferred while the EV moves on the road (i.e. dynamic inductive charging).
The present PhD thesis aims to study inductive charging systems for EVs, while also proposing ways to increase the transferred power and the system’s efficiency. In this scope, a review of the compensation methods, the magnetic couplers and the control schemes is initially presented, considering the case of static inductive charging. Moreover, the basic operational principles in the case of dynamic inductive charging are studied, while examining the necessary modifications in the operation of the system when it is expected to operate with the EV moving over the station. Additionally, in the case of dynamic inductive charging, the bifurcation phenomenon (indicating the maximization of the system’s efficiency in frequencies different than the one maximizing the power transferred to the EV battery) is studied not only according to the operational frequency but also according to the movement of the EV. Moreover, the selection of the compensation capacitors’ values is examined according to the variations of the self-inductance values of the magnetic coupler’s coils (due to the movement of the vehicle over the station), in order to achieve a high transferred power at an increased system efficiency.
In order to achieve a high power transfer and efficiency in dynamic inductive charging not only do the compensation capacitors need to be appropriately selected, but the optimal values of all the system’s parameters shall also be optimally defined. In this respect, an optimisation method is proposed aiming to define the optimal values for the operational frequency, the values of the compensation capacitors as well as the load resistance in a dynamic inductive charging system. Taking into account the requirements for the implementation of this optimisation method, a control scheme is also proposed that does not require any additional detection mechanisms to identify the position of the EV over the station, while eliminating communication requirements between the primary and the secondary side of the system. The effective operation of the proposed control scheme is validated by an experimental setup, comprising a circular magnetic coupler, the required compensation capacitors and the inverter implementing the suggested control scheme.
Considering the electric grid side, inductive charging technologies can allow the wireless transfer of significant amounts of power to the vehicle’s battery. In this respect, a methodology is introduced for grid impact analysis of both static and dynamic inductive charging technologies in distribution networks, while also defining the maximum deployment level of inductive charging stations that does not violate technical grid constraints. Additionally, in case of a vast deployment of inductive chargers, modifications in the control system of the charging stations are examined in order to develop the necessary energy management system that will effectively eliminate issues which may arise in the grid operation.