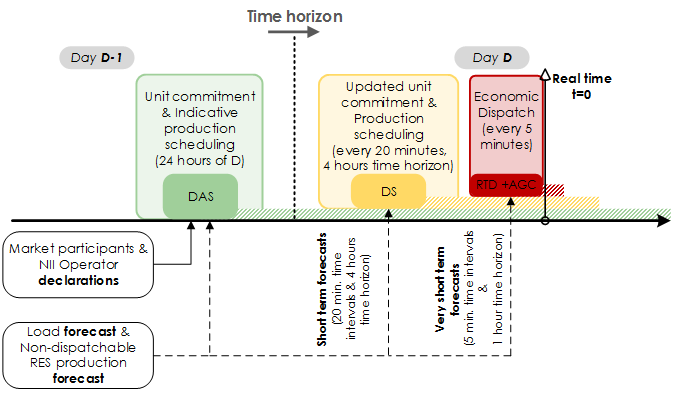 The examination is open to anyone who wishes to attend (Multimedia Room, Central Library of NTUA).

Abstract: The fundamental objective of this thesis is to investigate the operation of island systems under high renewable penetration conditions and to evaluate the value of flexible storage facilities to this end. To do so, a generation scheduling problem for autonomous power systems with substantial penetration of non dispatchable renewable energy source (RES) technologies, namely wind farms and photovoltaics, is initially developed, proposing a novel unit commitment and economic dispatch (UC-ED) model which is built upon the state-of-the-art mixed integer linear programming (MILP) method. The model improves the area of operational security for isolated systems by incorporating a full set of active power reserves requirements in the UC-ED problem, relating the fast response capability of each operating unit to the maximum acceptable frequency deviation of the system. Furthermore, the proposed UC ED model is the first in the literature explicitly relying on the technical characteristics of committed dispatchable units and system frequency deviations to determine the RES penetration limits of non-interconnected-island (NII) systems, overcoming any arbitrary assumptions previously made in the relevant published work. Notably, the developed UC-ED methodology is generic enough for application in any isolated power system while, at the same time remains compatible with the provisions of the regulatory framework for Greek NIIs, thus being directly implementable in real-world study-case systems.
The abovementioned UC-ED tool is further utilized to investigate the role of storage to the enhancement of renewable shares in isolated systems. Firstly, storage within the Hybrid Power Station (HPS) paradigm is investigated. HPSs are aggregate stations comprising storage and RES generation facilities, managed in a coordinated manner by their owner to ensure dispatchability of the entire plant, similar in principle to the concept of Virtual Power Plants. The UC-ED model is suitably amended to incorporate any number and technology of HPS, while an internal dispatch policy for the HPS is also developed, formulating the problem from HPS-owner viewpoint, to properly model stations participation in the electricity market NII. The attributed benefits to the island system deriving from the introduction of HPSs incorporating battery energy storage stations (BESS) and various primary sources of energy (wind farms, photovoltaics or both) are thoroughly examined in terms of system economics, decarbonization and RES penetration shares.

Besides HPS, centrally managed flexible storage solutions (e.g. BESSs) are also investigated. The UC-ED model is once again modified to receive standalone BESS facilities. The obtained results reveal that the predominant contribution of batteries is in providing primary up regulation reserves, while energy arbitrage is not favored by the UC-ED algorithm, indicating that BESS configurations of limited storage capacity constitute the most viable options. The feasibility of storage investments in isolated island grids is also investigated considering three metrics for the BESS: the discounted payback period (DPP), the levelized cost of energy (LCOE) and the levelized cost of reserves (LCOR). The DPP is used to determine the feasibility of storage investments assuming that BESS reaps the entire anticipated financial benefits for the system deriving from the deployment of centralized storage. The LCOE index proved to be unrealistic, providing remuneration prices up to some thousands of euros per MWh produced by the BESS. On the other hand, the LCOR, accounting for only the provided primary up reserves of the BESS station, resulted in reasonable pricing levels, proving that BESS investments can be sustainable.

Finally, a comparative analysis between the energy storage variants presented earlier, namely the HPS and the centralized storage, is performed under high RES penetration conditions. Specifically, an island system is investigated, to which an increased amount of wind farms is deployed. The additional wind power is either included within a more complex HPS configuration comprising flexible BESS or supported by centrally managed BESS facilities, which are directly supervised by the system operator. In total, 100 different BESS configurations were investigated, half of which were related to the sizing of HPS storage components and the rest were devoted to the standalone storage sizing. The optimal generation scheduling methodologies developed within this thesis were used in all cases to perform annual simulations. An important conclusion drawn from the analysis is that both energy storage typologies, if properly dimensioned, can lead to similar annual renewable energy penetration rates. However, for achieving the same RES penetration levels, it has emerged that centrally managed storage stations require components of a substantially smaller size than those of HPS, especially in terms of storage capacity.