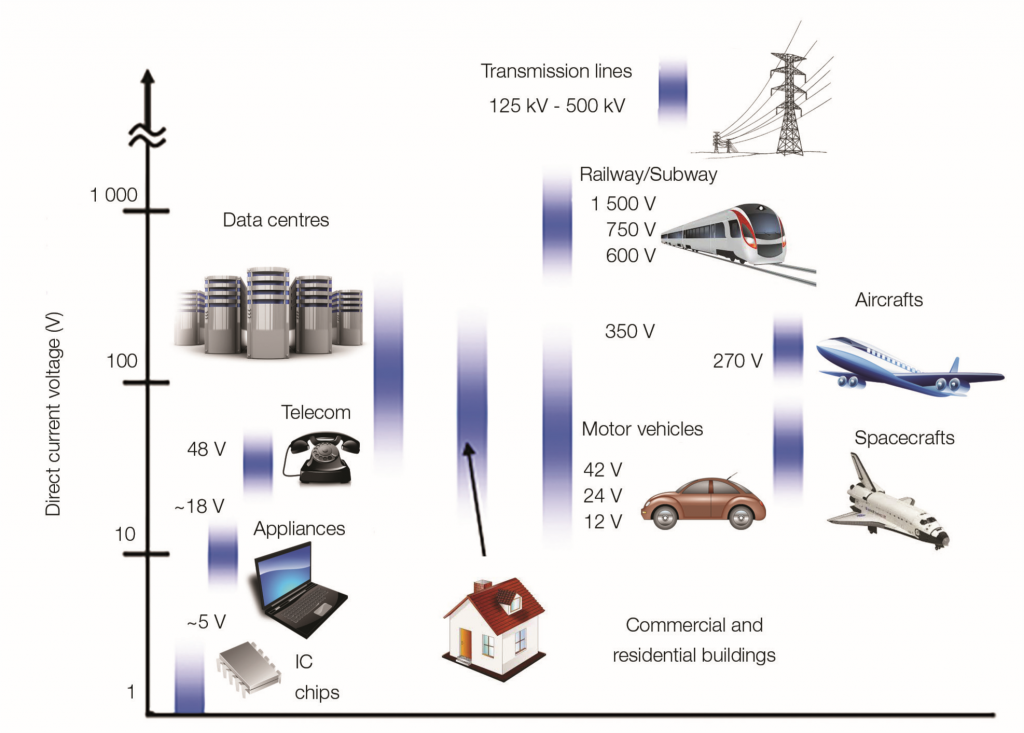 The examination is open to anyone who wishes to attend (Teleteaching Room, Central Library of NTUA).

Abstract: The use of Direct Current (DC) technologies for electricity distribution networks is of particular international interest because of the technologies used in both production and consumption level. This interest is fueled by the need of achieving high targets in terms of share of renewable energy sources in addressing total demand. It is a fact that a large number of renewable energy sources and storage units such as photovoltaics, batteries, etc. operate with a direct voltage. Therefore, integrating these devices into DC distribution network architectures through appropriate DC/DC converters is an attractive option in terms of increasing overall performance due to the reduction of intermediate conversion steps. These systems generally provide improved reliability and easier control compared to AC alternatives, given the lack of constraints such as reactive power balance, synchronization problems, and so on.

In this thesis two applications of Low Voltage DC (LVDC) systems were studied. The first category is about microgrid topologies and issues related to their control and operation while the second category is about electric railway networks operating in DC (Metro, Tram) as well as the benefits resulting from management of the generative energy producing during the braking phase of the trains.

Firstly, the history of the DC networks and the basic applications of LVDC systems are presented. An introduction to the concept of microgrids and electric railway networks is performed and their basic characteristics are presented. Reference is made to the basic control architecture (hierarchical control) concerning the operation of microgrids as well as the basic islanding detection methods that appear in literature for the operation of DC networks.

In this thesis a novel islanding detection method is developed based on the operation of a controllable load in parallel to the central switch of a DC microgrid. Additionally, the issue of smooth transition of a DC microgrid from stand-alone to interconnected operation is examined. Modeling of the individual elements of the studied microgrid is presented and simulations are performed based on variations of the IEEE 1547 and UL1741 standards. The performance of the proposed control strategy is evaluated through simulations, Control Hardware-in-the-loop tests and fully hardware experiments performed at the Electric Energy Systems Laboratory of National Technical University of Athens.

The second section of this thesis is about electric railway networks operating in DC (Metro, Tram) as well as the benefits resulting from management of the generative energy producing during the braking phase of the trains. In railways, trains operate either as loads (acceleration - constant speed phase) or as generators (regenerative braking of trains). The energy produced is consumed by other trains running on the network or consumed locally on on-board dump loads (resistors). The produced energy cannot be returned to the distribution network since in most cases the traction substations consist of uncontrollable rectifiers (diode devices) that do not allow bi-directional power flow. Managing the energy produced leads both to reduction of losses and to voltage regulation in the railway network.

In the context of this thesis, management of the generative energy is studied using:

Additionally, the influence of train schedules on the electrical characteristics of the railway network (substation voltage, line currents, etc.) are studied. The performed analysis include modeling of individual network elements such as electric traction substations, electric trains as well as network modeling to calculate the voltage developed between the return line and the earth (rail to ground voltage). Extensive reference to storage technologies encountered in railway applications, is made. The thesis examines both local controls and coordinated control of the units (bidirectional substations and stationary storage devices) in order to optimize network voltage regulation of the trains. The network studied is a modified version of the Metro railway network of Thessaloniki. Finally, the study of these issues is carried out using MATLAB simulation tool, in which a simulation program of the electric power flow is created in DC power networks.