Research Prof. Georgios Stamatakos elected a member of the Board of Trustees of the international Virtual Physiological Human Institute (VPHi) 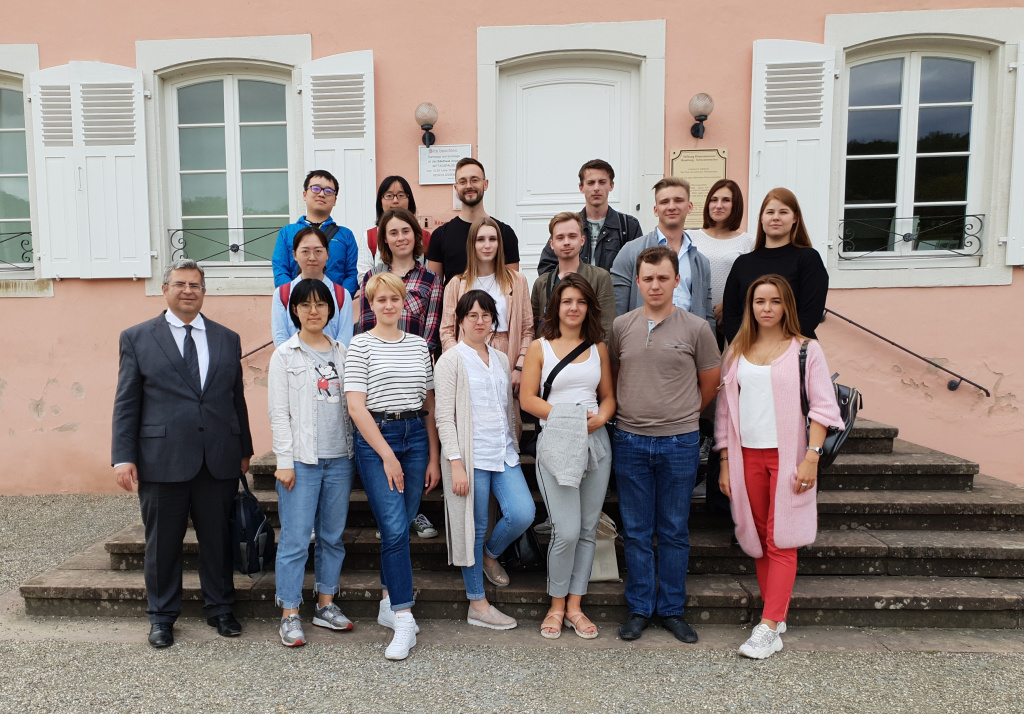 Figure: Georgios Stamatakos (left) with postgraduate students of medicine from Germany, Russia and China participating in the Paediatrics Summer School, organized by the Medical School, University of Saarland, Germany (1-8 Sept. 2019). In front of the Roman Museum of Schwarzenacker, just before discussing the role of in silico oncology / In silico medicine in medicine of the future.

ICCS/ECE-NTUA research Professor Georgios S. Stamatakos was elected a member of the three member Board of Trustees (BoT) of the international Virtual Physiological Human Institute (VPHi) on October 4, 2019. His election took place during the General Assembly of VPHi held in Paris.

The role of the BoT is to supervise the operations of the Board of Directors, ensuring that such operations do not get into conflict with the interests of the membership at large and do not violate the common law, the legal provisions and the provisions in the articles of association.

VPHi is an international non-profit organisation incorporated in Belgium, whose mission is to ensure that the Virtual Physiological Human is fully realised, universally adopted, and effectively used both in research and clinic. The current focus of the association is the advancement and the clinical translation of in silico (computational) medicine.

In silico medicine (also known as "computational medicine") is the application of in silico modelling to problems involving health and medicine. It is the direct use of computer simulation in the diagnosis, treatment, or prevention of a disease. More specifically, in silico medicine is characterized by multiscale modeling, simulation, and visualization of biological and medical processes in usually high performance computers with the goal of simulating real biological processes in a virtual environment. Its main goal is to support patient individualized treatment optimization through the conduction of in silico experiments (i.e. experiments on the computer) by using the patient’s actual multiscale data (molecular, histological imaging etc.) Conducting in silico trials is another clinically crucial applications area of in silico medicine. The high importance of this new scientific, technological and in the future clinical field is particularly stressed by the European Commission (EC) on their official website.

Dr Stamatakos is Research Professor of Analysis and Simulation of Biological Systems and their Interaction with Electromagnetic Radiation at the Institute of Communication and Computer Systems (ICCS), School of Electrical and Computer Engineering (ECE), National Technical University of Athens (NTUA). He has also been a visiting professor of ECE-NTUA and a visiting professor of the Medical School, University of Saarland, Germany. He has founded and directs the In Silico Oncology and In Silico Medicine Group, ICCS/ECE-NTUA. He has been a pioneer of in silico medicine and in particular in silico oncology.

Of special importance is his and his research group’s exemplary long term collaboration with Professor Norbert Graf, Director of the Paediatric Oncology and Haematology Clinic, Medical School, University of Saarland, Germany and Chairman of the Renal Tumour Study Group of the International Society of Paediatric Oncology). Georgios Stamatakos and Norbert Graf, both VPHi members, have joined forces to validate the Nephroblastoma Oncosimulator, a multiscale modelling based simulator of the response of the nephroblastoma tumour to real clinical treatment, and design the next critical steps of the clinical translation procedure.