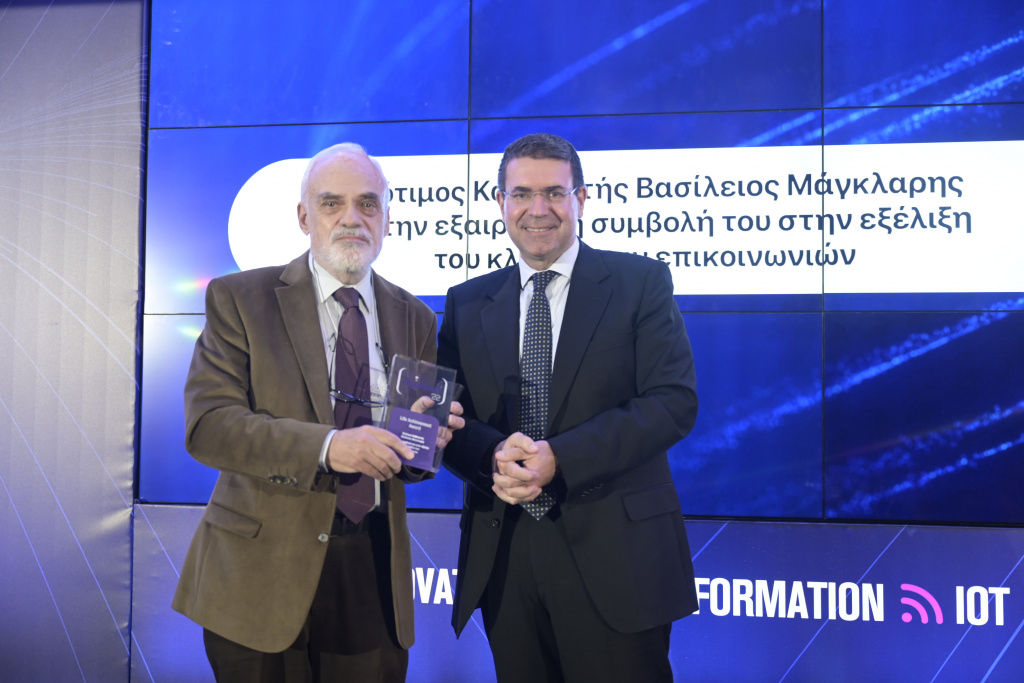 Professor Emeritus Vasilis Maglaris received a Lifetime Achievement Award for his contributions to the evolution of the telecommunications sector at the Mobile Excellence Awards ceremony on the 9th of December, 2021. He was selected for this award by a panel of industrial leaders representing the three major Telecom Operators of Greece (EEKT), the Chamber of Informatics Industries (SEPE) and the Organization of Mobile Applications (SEKEE), coordinated by the E-Business Research Center of the Athens University of Economics and Business Economics (AUEB) and assisted by the Boussias publishing company.

Professor Maglaris holds an Engineering Degree from the National Technical University of Athens – NTUA (Athens, Greece, 1974) and a Ph.D. degree from Columbia University (New York, USA, 1979). Between 1979 and 1989 he held industrial and academic positions in the USA, all in advanced electronic communications. From 1989 to 2019 he was with the faculty of the School of Electrical & Computer Engineering (ECE) at NTUA teaching and performing research on Internet technologies, directing the Network Management & Optimal Design (NETMODE) Laboratory that he established. He was responsible for the development of the NTUA Campus LAN and of GRNET, the National Research & Education Network (NREN) of Greece. From 2004 to 2012 he was the GÉANT Policy Committee Chairman, the governance body of the advanced Internet serving the 37 NRENs of the extended European Research Area. He served as the Managing Director of the National Hellenic Research Foundation - EIE (1994-1996) and as a Commissionaire of the National Regulatory Authority for Telecommunications & Posts EETT (1995-2005). From July 2012 to June 2013 he was appointed by the Greek coalition Government as General Secretary for Research & Technology, on hold from his duties at NTUA. In 2020 the NTUA Senate conferred upon him the title of Professor Emeritus, enabling him to continue his teaching and research activities beyond his retirement in 2019.

His selection for the Lifetime Achievement Award may be indicative of the on-going bonds of NTUA and high-tech innovative industries in Greece, with ECE-NTUA School's students and young graduates being a significant pool feeding the dynamic ecosystem of technology ventures and start-ups.